Hello, Today I’m gonna talk about Hanami, I really wish to use it, then I decided to create a project to combine everything that I want to learn. I intend to do a saga covering my journey to complete it. I intend to use some technologies like MQTT and RXTX to do the communication with my Arduino and after that an application to execute some commands on my board. This saga is inspired by this post (made by a friend of mine), but I decided to use different tools, languages or frameworks to get some new knowledge.

The first post is about the high level application, responsible to send and receive all commands like a kind of dashboard where I can send commands, indicators and other things.

Basically, I’m going to show how I made my setup basic development to a new Hanami application, but first what’s Hanami? My first definition is Hanami, based on website, is a modular web framework that allows you to do applications decoupled based on Clean Architeture and Monolith First.

Ok, now I have the framework, but I don’t need to install all dependencies at my machine then I asked myself. “How can I simplify my setup?” One possibility is Docker. I decided to use it because I like :) and it turns easier to do the setup and to run applications. With Docker we can encapsulate all environment inside a container.

Another good tip, gave by a colleague, is Scripts to rule them all, it’s convenient because following these rules we can use it like a convention to run projects in different languages and frameworks keeping on mind we need only to run a script inside a folder to test, run and build.

After the hanami installation (running ‘gem install hanami’), the first thing to do is create an application that we want to run, we can do it running the command below.

Ps:. You can pass options to it, for example database, test framework and etc, you can check all options at the code. or on site

To run Docker first we need to install it, we want to install docker and docker-compose, but I won’t cover installation here to simplify this post, but you can check how do it at the docker website.

After installation, we can check it.

Ps:. Currently it’s stable version but you can use superior versions.

We need the file called ‘Dockerfile’ to specify all steps to build our application container, so we can start creating it.

And the .env file to store our environment variables, in our case a database string connection.

And when we run ‘docker-compose up’, we got it: 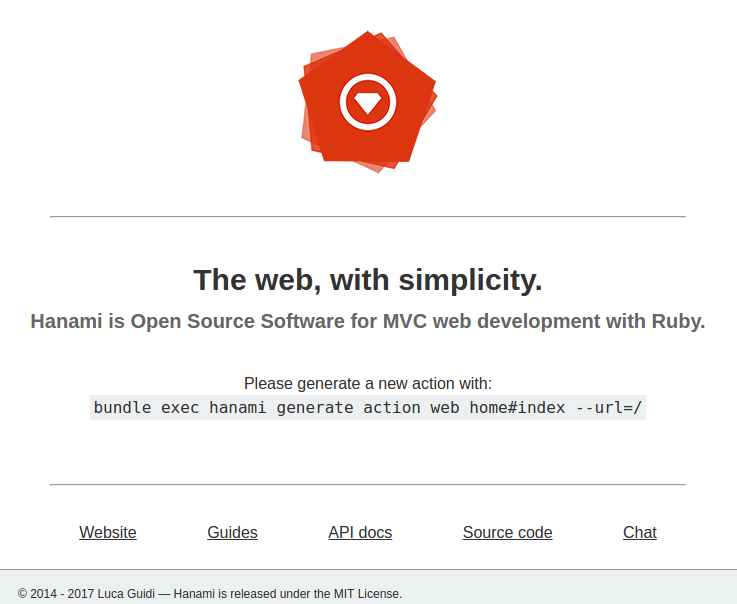 In docker-compose we added this line:

This command is responsible to run the app. If I’m at phoenix application for example we need to write a command like below.

Now, imagine when we have a codebase with many languages, we can spend much time only remembering how do the setup for the application before start some task. From my point of view it’s a caos.

One of possible solutions comes from Script rule them all. It has a mission to show some tips to automate some common tasks in your project, we can use it for any language or framework keeping on mind only the main idea behind that.

As the same example above, now, we can create a script to run the server. We can use the script below to execute it inside of container.

We can add many other scripts to different purposes trying to remember the rules, I don’t wanna to cover all scripts but you can check it at the project page.